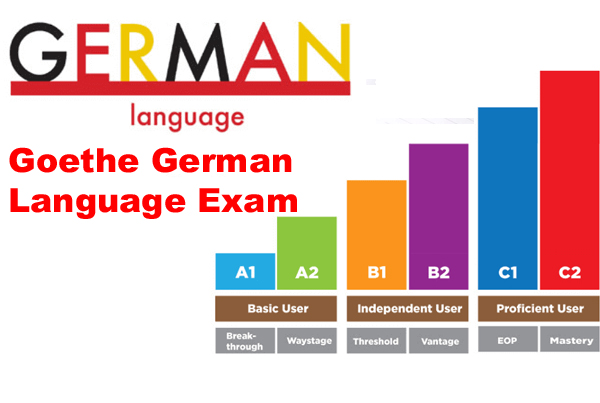 We teach German language from A1 level to C2 levels to everybody be it students, job
seekers, engineers, professionals, house wifves, businessman so you could be anybody who is
interested to learn German language.

The best things about us is that we offer German courses as per your convenience and
preferences such as online, offline, daily classes, classes on weekend, evening classes,
extensive courses, intensive courses so you have freedom to choose the day and timing of
German language courses whenever you are free as per your liking.

The Goethe-Institut has been named after ‘Mr. Johann Wolfgang von Goethe’ and he was the
greatest Poet and statesman Germany has ever produced.
The Goethe-Institut was established in 1951 and it has its HQ in Munich.
There are almost 157 Goethe institutes in almost 98 countries of the world.
It is a non profit organisation which is funded by grants from the German state and also by
the fees from its own courses and examinations.

German language courses are divided into 6 different levels based on the acquired
proficiency in the language as below:

The Goethe-Zertifikat A1 Level

It is a German language exam for adults. It certifies that German language learners have
acquired basic German language skills which correspond to the first level (A1) on the six-
level scale of competence mentioned in the Common European Framework of Reference for
Languages (CEFR).

The Goethe-Zertifikat A2 Level

It is a German language exam for adults. Pursuing A2 level demands previously acquired
elementary language skills and it corresponds to the second level (A2) on the six-level scale
of competence mentioned in the Common European Framework of Reference for Languages
(CEFR).

The Goethe-Zertifikat B1 Level

It is a German exam for adults and for age group people older than adults. B1 level German
course ensures that candidates are independent users of the German language and B1

corresponds to the third level (B1) on the six-level scale of competence laid down in the
Common European Framework of Reference for Languages (CEFR).

The Goethe-Zertifikat B2 Level

It is a German exam for adults and for age group people older than adults. B2 level German
course confirms that German language learners have got sufficient advanced language skills
and B2 corresponds to the fourth level (B2) of the six-level scale of competence mentioned in
the Common European Framework of Reference for Languages (CEFR).

Benefits of Learning German Language with us

1, You want to study your degree course completely in German language for example
Bachelor and Master degree in Germany. Therefore Certificate of German language course
B2 level of Goethe Institute will be acceptable as a proof of your German language
proficiency for your admission in German Universities.

3, German Job Seeker Visa process can be lengthy for you however your German language
course certificate from Goethe can land you Job Seeker Visa faster than stipulated processing
time.

4, You wish to obtain German Spouse Visa or Germany Family Reunion Visa so it is an
important requirement for you to learn German language A1 Level from Goethe Institute.

5, learning German language from Goethe Institute also helps to process your visa faster for
germany because it gives an positive sign that you are a serious person for going to germany
for your different reasons.

6, When you apply for German citizenship then also Goethe Institute B2 level certificate is
acceptable to grant you citizenship of Germany

German A1 exam pattern is easy to understand and easy to pass provided you learn basic
German properly. There are 4 parts or module in the Goethe A1 examination:

It is important to get 60% in order to pass the Goethe Institut A1 examination.
Let us explain you all the 4 modules one by one for your better understanding:
Hören (listening):

Teil 1 (5 marks): In this question, you will be given some information about a person and
based on this information, you need to fill a form on his or her behalf.  There will be 5 blanks
in the form and you need to read the given information and fill out these 5 blanks.
Teil 2 (10 marks): You need to write a formal or an informal letter of 30 words with the right
salutation, and ending.

Teil 1 (3 marks): Introduction, knowledge of German alphabets and German numbers.
Teil 2 (6 marks): W-Questions (who, why, what, etc.)
Teil 3 (6 marks): Request questions ( for example Could you please pass the water bottle? or
May I use your computer? etc)

IELTS listening Tips to Get 9 Bands